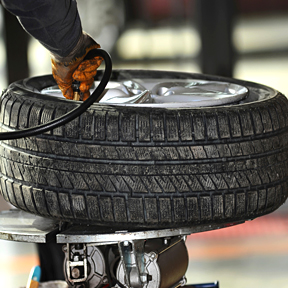 Back to Step 13: Save Money On Transport

How tyres can save on fuel costs

When it comes to tyres, issues of safety and performance are a priority for most people. However, not many people think about the efficiency of the tyres and their contribution to fuel usage.

Tyre manufacturer Michelin estimates that tyres can account for up to 20% of your fuel consumption.

That’s equivalent to one tank of fuel out of every five.8 So buying fuel-efficient tyres can save you money.[1]

What is rolling resistance?

Rolling resistance, sometimes called rolling friction or rolling drag, is the force resisting the motion when a tyre rolls on the road.[3]

Look for tyres with ‘low-rolling resistance’. These tyres can reduce your fuel bills by up to 6%.[4]

Also, make sure you pump up your fleet’s tyres to the manufacturer’s recommended levels each week. It may sound tedious, but it makes your vehicles safer and more fuel-efficient, saving you money.

Correct tyre pressure can improve fuel efficiency by up to 4%, improve handling and extend the life of the tyre by up to 10%.[5]

Did you know? 400 million Michelin low-rolling resistance tyres – also called fuel-efficient tyres – have been sold in Europe since 1992. These tyres have enabled an estimated saving of 9.5 billion litres of fuel.[6]

Tyres in your fleet

According to Bridgestone Tyres, fuel is the major running cost for fleets in Australia, accounting for almost a third of their total outgoings. The effect of tyre rolling resistance is calculated at approximately 10% of a fleet’s total running costs. This is a significant expense.[7]

 How much could your business save by examining your tyre choices? 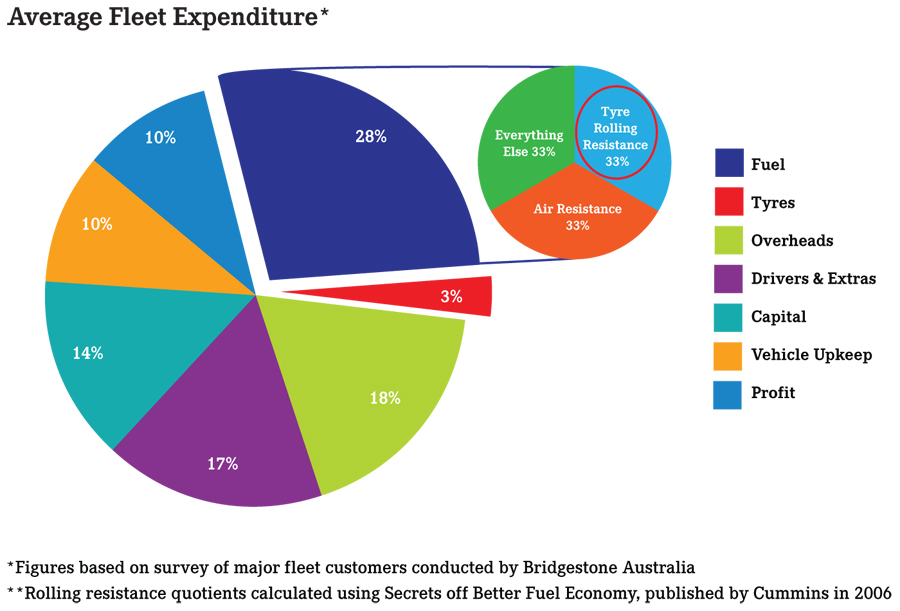 How much can truck fleets save on fuel with energy efficient tyres?

Bridgestone has been trialling using Ecopia and trailer tyres across multiple B-Double, tanker and trailer applications in Australia to see what kinds of fuel efficiencies can be achieved.

“On average, we have been seeing up to a 6% fuel saving across the fleets we have been working with,” said Claudio Sodano, Bridgestone’s National Technical Field Service Manager.

Ron Finemore Transport carries out long distance line-haul transport services. Given the long distances travelled by their trucks, they decided to fit fuel efficient, low-rolling resistance tyres on their fleet of prime movers and trailer combinations.

They reported that “the cost savings from lower fuel consumption achieved by fitting Low Profile Tyres to RFT vehicles far outweigh the extra tyre purchase and operating costs,” and that “Low Profile Tyres provide an attractive, timely pay back on the extra investment required.”

‘It is estimated that 5–15% of light-duty fuel consumption is used to overcome rolling resistance for passenger cars. For heavy trucks, this quantity can be as high as 15–30%.’[9]

BACK TO STEP 13: SAVE MONEY ON TRANSPORT
PREVIOUS TIP
NEXT TIP